Arriving almost simultaneously with my order from Khurasan was a couple of packs of Creatures from Pendraken.

These are nominally 10mm figures, but these are aliens, so what's a few millimetres here and there.

In the £12 pack you get 1 Queen (22mm high), 20 Medium creatures (15mm high for the more upright ones) and 10 Small creatures (about 8mm high) and a bunch of egg clusters and face huggers.

These photos are from some I've had and painted from quite some time ago, not the most recent packs.

Here is a bunch of small aliens menacing a pair of GZG's UNSC troopers. Also an open egg case and face hugger lurking ready to strike.

Here is a collection of the medium sized creatures, these are about the same size in height as the GZG 15mm UNSC figures. 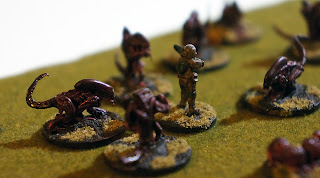 "Maybe they don't show up on infra-red at all" 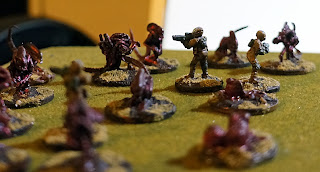 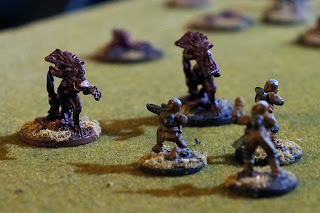 And finally the large aliens, these tower over the UNSC figures as they come forward with a terrifying "I'm a little teapot" pose. 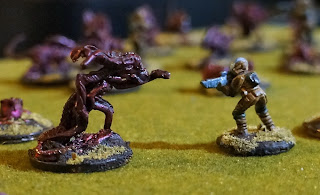 "What are we supposed to use, harsh language?" 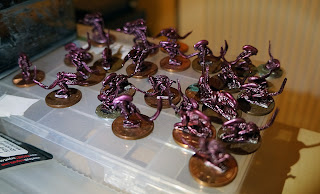 These are some of the new lot being painted up. I'm using a mix of red and black ink (3 to 1 ratio red to back) with a drop or two of flow enhancer painting over bare metal. I'm building up a lacquer effect with multiple layers and will probably stick in a layer or two of plain black ink wash to darken and pick out the details a bit. Then I'll pick out the odd bit of more fleshly like detail with dark red paint to get a contrast in shininess and maybe try a bit of slime modelling with acrylic gel. The only problem with the ink on bare metal is it's a bit fragile and prone to flaking off if you clumsily knock the entire lot on the floor while you take photos of them! I'll have to touch up the odd spot on some of these.

When these are done I'll have more than enough aliens to do the Bugs in the Reactor scenario in Tomorrow's War. Watch out Colonial Marines! Insert Aliens quote here!