Bugs in the Reactor

Now I've got enough aliens, I've been getting ready to play the Bugs in the Reactor scenario in Tomorrow's War. 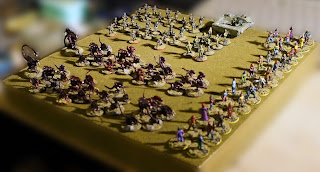 Here's the miniatures for the scenario all lined up quite in quite a friendly manner, blissfully unaware of the carnage yet to come.

The civilians who built their reactor on top of an alien burial ground. Although some of them carry weapons they will be ineffective in combat. 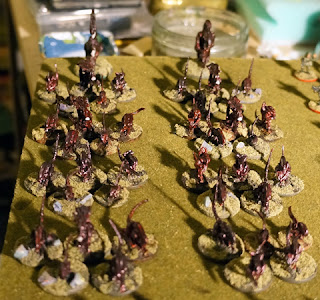 The Bugs. Justifiably upset with the colonists, they seek to gain their revenge by taking out a no win, no fee legal damages claim in the local courts. Failing a successful result they will resort to eating the colonists.

Eight groups of 5 aliens each, armed to the with teeth. 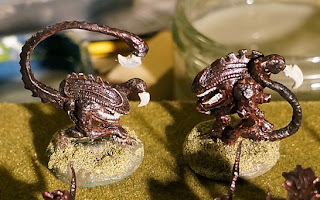 The King and Queen, not sure which is which. These are old Citidal miniatures. 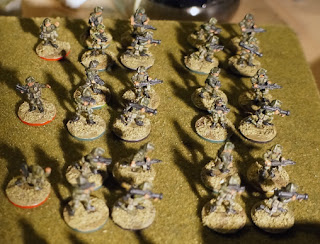 The legionnaires. Three squads of bad ass trooper types. All they are missing is a nuke to take off and bomb the aliens with from orbit. Which is a shame as they are probably going to need one. 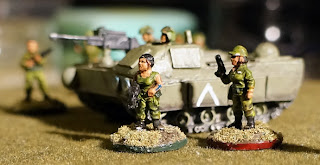 While reading through the scenario I realised they needed a converted tractor type vehicle with tracks, which I didn't have. I was going to substitute a wheeled Old Crow APC when I also realised I had 4 sets of spare tracks that came with my Khurasan Heavy Tank which has the anti-grav modification... so a bit of work with plasticard, milliput, spare plastic model parts and one of the spare autocannons from a Khurasan DIMOG armoured suit (Khurasan do put a lot of spare parts in some their models) and I came up with this tracked monster future Bren Gun Carrier.


The vehicle is crewed with a spare half man (Khurasan again), and a crouching heavy machine gunner (Oddzial Osmy's New Vistula Legion).

I could do with a seated vehicle commander as it is supposed to have a crew of 3 but I may not have anything suitable. Have to paint 3 more patrol types also for when their vehicle gets eaten and they have to dismount 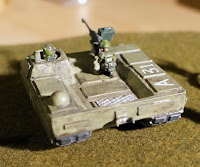 Next task, make up a few more road sections to cover the length and width of the 6' x 4' table. The colonists buildings may very well start out as ruins - building on alien burial grounds is terrible for subsidence.