Track Conversion No 2 and Other Stuff

I've made another tracked vehicle using the remaining spare track units from the Khurasan Siler Heavy Tank that had the grav vehicle mod. Here's a bunch of photos of the construction process... 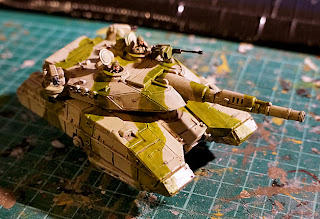 The donor vehicle for the tracks, this is the Silar Heavy Tank from Khurasan with the grav modification.

This has had an additional gun mounted on the turret for the commander. The gun is another spare autocannon from a Khurasan's DIMOG walker.

On the previous tracked conversion this was the main gun, on the battle tank it's just a minor secondary weapon! Shows how big the tank is. 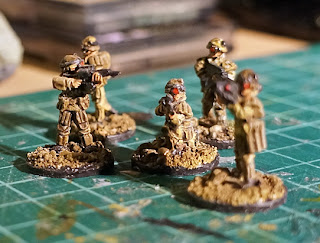 Speaking of Khurasan stuff, here's some Nova Respublic figures (the next lot of infantry I'm painting up). 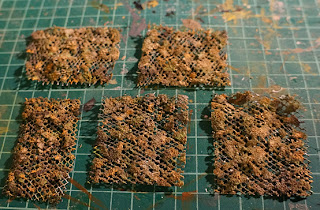 And here's some camo scrim nets made from plastic netting (contained garlic originally so proof against visibility and vampires) with flocking material stuck on and then painted.