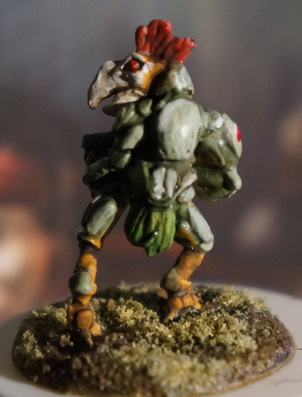 With the sound of his nest-mates' battle cry ringing in his ears, Flock subLeader Garrak leapt from the smouldering battle-wagon desperately trying to keep up with the rest of the platoon as they stormed towards the enemy defensive line ahead of them.
To the left and right tracer rounds ripped by his head leaving bright violet streaks across his vision. Shaking his head to in an attempt to clear a high pitched buzz caused by the enemy missile that had disabled his vehicle, he raised his assault carbine and returned fire more at less at random as he continued the charge.
The enemy defenders had dug in on the front face of a hill, burrowing into the ground and piling the dirt in front of their holes to form a steep sloped bund twice the height of a Harook. Firing holes had been dug through the bunds and lined with wood so the defenders could fire without exposing themselves. The tops of the bunds were covered with thorny vegetation gathered from local woods mixed with razor wire.
Garrak fired out the last of his magazine straight down the firing hole and bounded to the top of the slope, leaping over the razor wire and thorns with ease. Obviously the enemy had never faced angry Harook before or they would not have relied on such a low protective fence, even juvenile Harook fresh from the nest would have had no trouble clearing the wire.
Garrak landed in the dug out position and his avian eye quickly took in the surroundings – two of the enemy falling back with smouldering armour desperately trying to reload their weapons, one other fleeing into a tunnel leading into the hill side, and one closing from the right swinging up his weapon to engage the intruder. 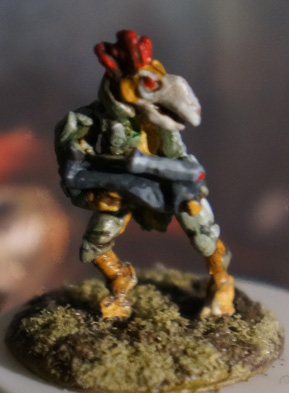 The Harook hopped closer to the attacker and kicked out with his foot claws in a vicious sweep from the front to the rear, catching the enemy under his chest armour and spilling an interesting looking collection of entrails across the dug out – tasty treats for later, assuming he'd survive the next few minutes.
Leaping forward, Garrak opened his beak wide, yelling a battle squark as he closed with one of the remaining enemy, the squark ending abruptly as he closed his beak over his victims head and plucked the whole thing, helmet included, from the torso of his terrified opponent.
The last standing enemy soldier was drenched in blood that burst from his squad mates body and fell back throwing down his weapon in an attempt to surrender. Garrak quickly reloaded his rifle, and leaving the coward to the rest of his nest-mates plunged into the tunnel shooting rapidly into the dark.
The darkness and close confines of the tunnel was terrifying to Garrak, but his battle fury overcame his cultural phobias and he charged screaming down the tunnel ignoring the self inflicted wounds caused by scraping along the tunnel wall. With his head down in a full charge, Garrak's overall height was reduced by half, and as he burst into a chamber most of the fire directed at him went over his head. A strong blow to his left arm spun him around as his ceramic armour deflected the one round that hit him and he tumbled to the floor at the defenders feet.
Garrak braced himself to leap to his feet and take the lives of as many of these dirt dwellers as he could before they could finish him, but before he could start to move the defenders flew apart in a ripple of explosions as one of his nest-mates following him into the tunnel fired an entire magazine from his micro-missile support cannon at waist height.
_______________________________________________________________________________________________
This is the first Harook from Mad Robot Miniatures that I've painted, when I can keep my brush steady in between coughing and sneezing
Posted by Felonmarmer at 19:01