Walkers, what are they good for?

I've just finished painting the last of my DIMOG walkers that I bought from Khurasan so I thought I'd put together a post about all the walkers I have and the problems they pose.

The biggest problem is getting a bloke in there. Most of them do not have enough room for anyone to sit in them unless they were recruited from the casualty wards. Now this may not be too far fetched, it at least gives a reason for the existence of walkers, which is tenuous at best.

The only possible reason for them is a need for something more armoured and carrying more powerful weaponry that has similar mobility in terms of terrain as infantry. So they could only be used where tanks can't go, as anywhere a tank could go, a tank would be superior in terms of armour, weapon size, speed, range, lack of joints to break and also a lower silhouette. So we can only be talking about very rough broken terrain and possible heavily vegetated areas.

On to some pictures, here we have the DIMOG varients from Khurasan...
All of these obviously have no problem with fitting a crewman and are probably some of the most realistic style of walkers in the ranges currently available.

Next up we have some Steel Warriors, nominally 25mm scale power armour types, though such figures would have great difficulty getting their legs into the armour, as 15mm walkers they work much better...
Now we have a Critical Mass Protolene Scout Assaultsuit and an (unpainted, sorry) Copplestone 28mm Power Armour Suit (sans arms also)...
Each of these has problems with cockpit size. The Protolene Scout Assaultsuit obviously would require a lower limb amputee to drive it as the articulation between body and legs would not allow the pilots legs to pass through. Alternatively it could be a robot piloted by an AI instead. The 28mm Power Armour also has problems with crew position, although it does look possible for the legs of the pilot to fit in the upper part of the walkers legs, although it would require a saddle rather than a chair. 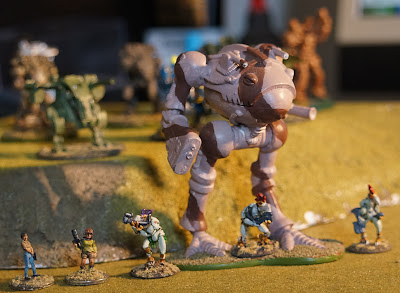 Now if you want to do it right, by which I mean if you are insane enough to think that walkers are a good idea, you have to be Harook, in which case you can create the fantastic Chicken Main Battle Tank.

The very size of the thing has a morale effect that compensates for its sheer impracticability and as such fits into the Harook philosophy of war quite nicely.

Source of model, unfortunately, is lost within the mists of time, but it was intended as a 25mm model, could do with a new paint job though.
Posted by Felonmarmer at 14:48