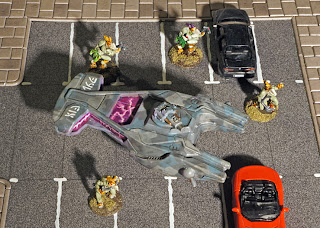 Looks like the Harook have been mortgaging their future to buy the very latest in grav technology.

The grav tank, an unnamed class at the current time, mounts a heavy fusion gun in a remote turret, as well as two ball turret mounted auto cannons for anti-personnel use.

The grav tank is powered by a fusion reactor. The reactor is normally enclosed by armoured panels but the Harook like the pretty purple light it gives off and so frequently leave them off. 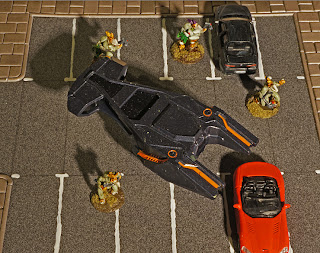 The turret is slightly truncated steel warrior (plastic mecha/power armour job) gun, chosen mainly because I have more of them than any other bit and I've got 4 more of these Tron vehicles to convert. One of them may have to have a different gun unless I can find another one.

The ball turret mounted cannon are 6mm BB's cut in half with a short section of a toothpick glued to it.

The proud Harook squad accompanying the vehicle are from Mad Robot Miniatures.
Posted by Felonmarmer at 21:10